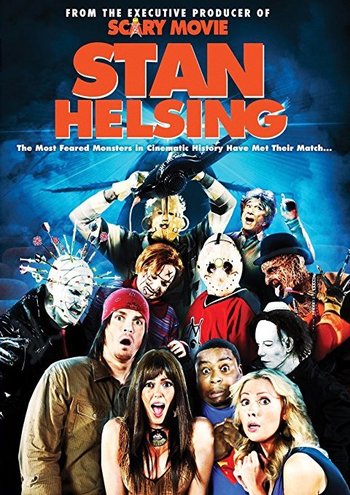 2009 horror movie spoof from one of the executive producers of Scary Movie. Not made by Seltzer and Friedberg, but with a somewhat similar style, if slightly (slightly) higher quality. Was released straight to video.

Stan Helsing parodies Van Helsing, A Nightmare on Elm Street, The Texas Chainsaw Massacre, Friday the 13th, Child's Play and Hellraiser. The villains of these movies (except Dracula, of all things) are planning to kill the last descendant/reincarnation of the original Van Helsing and lure him and his friends out to a deserted movie studio lot to do it on Halloween.

It's mostly pretty bad, but there a few redeeming features: a Leslie Nielsen cameo and Desi Lydic's endearingly ditzy performance as Mia, which belongs in a better movie.