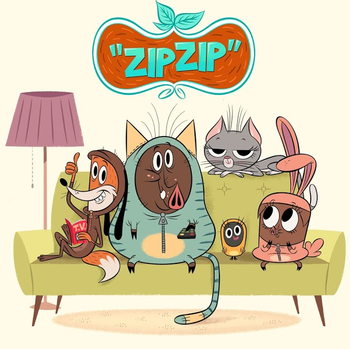 These 'pets' have a secret - and it's totally wild!
Advertisement:

Zip Zip is a French 2D animated series from GO-N Productions, which began airing in 2015 on France 3 and is shown elsewhere on the Disney Channel. Aside from Australia, it has yet to be transmitted to English-speaking countries.

Washington the fox, Sam the wild boar, his little sister Eugenie, and Suzie the blackbird have grown tired of living rough in the wilderness, and yearn for the creature comforts of the suburbs. However, they soon find animal control hot on their trail, and thanks to Wash's quick thinking, the group slip on some zip-up animal costumes so they can pass themselves off as domesticated pets.

They manage to convince the Livingstones, a young animal-loving couple, to take them in, much to the chagrin of the Livingstones' housecat Victoria, who finds her pampered existence turned upside down by these impostors. Hilarity Ensues as the gang learn to adjust to suburban life whilst trying to keep their wild instincts under control in their new surroundings.