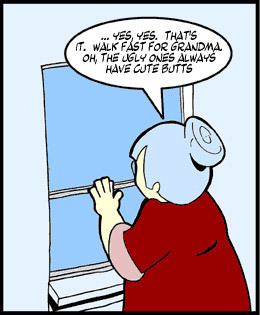 "How silly of me! I should have tied you to my bed."
— Nurse Edna, Maniac Mansion
Advertisement:

THIS is one lady menopause didn't totally turn off.

The Distaff Counterpart to the Dirty Old Man. Although the occasional swat or pinch on the bottom is not out of the question for the Dirty Old Woman, it's uncommon for her to grope or otherwise make lewd contact in the way that her male counterpart would. Instead, she'll do things like make Double Entendre-laden references to an "adventurous" past. In some cases, such a character will be played by a guy in drag. This is also a popular characterisation of a brothel's madame.

This character is almost always Played for Laughs, often as an Abhorrent Admirer of some sort. When they show up in a Darker and Edgier show, which is rare, they're often used to show the unfortunate fate of women who let their sex drives lead their lives or, inversely, the result of too much prudishness.

Compare with Mrs. Robinson who is younger, prettier and still sexually active and doesn't have much problem seducing a younger guy.