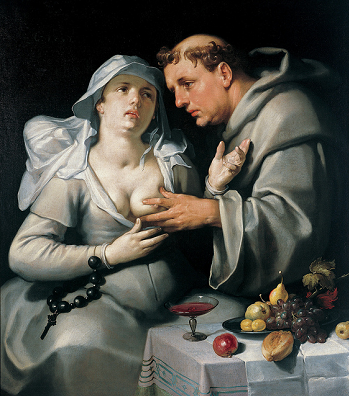 "Monk and Nun" by Cornelis van Haarlem, 1591
"Cor, what a lovely bit of stuff. I'd like to get my fingers around those knockers."
— Reverend Ronald Simms, the Dirty Vicar of St Michael's, Monty Python's Flying Circus
Advertisement:

A holy man, or a man pretending to be one,note it is often hard to tell an ordained hypocrite from a shameless impostor who, despite being ostensibly above such worldly desires, is one of the most perverted members of the cast, far more lecherous than any layperson. He's constantly eyeing up and making passes at girls, and often has a sizable stash of skin mags or other pornography.

The depiction of such characters varies widely between Western and Eastern works; while manga and anime will often play it for laughs with Buddhist (or pseudo-Buddhist) monk/priest characters, Western works will usually portray such characters as depraved, hypocritical, and often outright predatory (cf. Pedophile Priest). It isn't that the Europe doesn't have its share of comedic holy lechers though, especially with older works when such humor was easier to stomach.

This is quite an old trope; in Europe, at least, the depravity, greed, and gluttony of monks have been a common theme of both angry screeds and popular jokes and comic literature going back to The Middle Ages.

Not every religion requires its priests (or the equivalent) to be celibate, with some actively encouraging them to marry and have children, and a few (notably Islam) even forbid vows of celibacy. Though it is an inherent aspect of monasticism, so for actual monks to be seeking sexual pleasure will always fit this trope.

Subtrope of Nun Too Holy. May overlap with Sexy Priest, in which case it's the Spear Counterpart to Naughty Nuns. Mostly overlaps with Dirty Old Man and Woman.