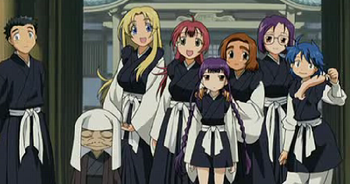 Media Blasters released the anime series in the US as Ah My Buddha as an allusion to the otherwise unrelated Ah! My Goddess. The Japanese title is Amaenaide yo!! (Don't be spoiled!!).

Amaenaide yo!! provides examples of: