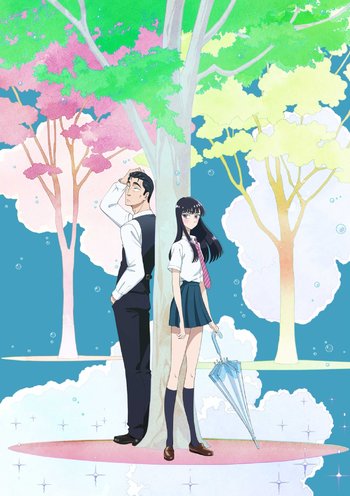 A pretty good representation of their relationship.
Akira Tachibana is a 17-year-old high-school student and former track star who ruptured a tendon and has been using her free time to waitress at a casual family restaurant, a job which would be utterly boring if not for the staff's manager, Masami Kondo, a 45-year-old divorcee whom Akira has completely fallen for.
Advertisement:

The story follows Akira's attempts to confront Kondo with her feelings and the way their relationship develops after he realizes she looks at him as more than a co-worker.

It also explores the main duo's relationships with several side characters, such as Haruka Kiyan, a member of the school's track team who feels hurt by Akira's cold, avoidant behavior; and Chihiro Kujou, Kondo's old college buddy and writing partner who has become a successful author in the years since they grew apart.

After the Rain (恋は雨上がりのように, Koi wa Ameagari no You ni, "Love is Like After the Rain") is a seinen romance manga by Jun Mayuzuki. It began in 2014 and ended in 2018 at a total of ten volumes. Kodansha released the series in English as a five volume omnibus set.

A twelve episode anime aired during the Winter 2018 season. Production was handled by Studio Wit.