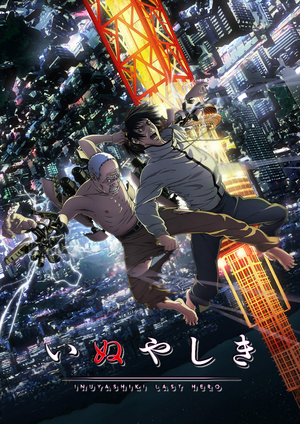 You wish your dad was this badass.
Advertisement:

Inuyashiki is a seinen manga created by Hiroya Oku (author of Gantz) and published in Kodansha's Evening magazine from 2014 to 2017.

It tells the story of the eponymous protagonist, Ichiro Inuyashiki, an elderly salaryman who is shunned by his family and co-workers. One day, while walking out with his pet dog, he is caught in the blast of an explosion caused by an unknown entity, and finds himself reformed as a cyborg. He then decided to use his power to do some good and save people, but as it turns out, he wasn't the only one affected by the explosion — Shishigami, an emotionally disturbed teen, is using his powers for destruction and violence. Things come to a head, and Inuyashiki soon finds himself as an unlikely hero in a desperate fight to save Japan- and soon enough, the world.

Do not confuse with Inuyasha.