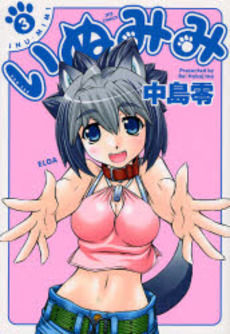 "It's been a while, so I hope they are doing well."
— Yuichiro Kinosaki
Advertisement:

Inumimi ("Dog Ears") is a romance manga series by Rei Nakajima that ran in Young Animal Arashi from 2005 to 2007, about dogs with human bodies, a scientist who can do anything, and awkward subtext.

Yuichiro comes home from an exchange program in Canada and finds that his father has given human forms to his three dogs, Elga, Luna and Rino. As he becomes accustomed to his new sisters, Yuichiro also has to deal with his neighbor, Emina, and her opinion of his and his dogs' proximity while the girls now have to learn how to live as humans.

The series manages to avert or avoid a surprising number of tropes considering the premise. Although there is still plenty of Fanservice, the Innocent Fanservice Girl behaviour drops off as the girls learn about wearing human clothing. Yuichiro is not romantically interested in any of them, and in fact feels uncomfortable around them because they are so human, proving that not All Men Are Perverts. Yuichiro's neighbor Emina warms up to the three girls without a whole lot of angst, quickly starts treating them like sisters and is (relatively) understanding and willing to give Yuichiro the benefit of the doubt for Not What It Looks Like. Many other tropes suffer the same fate, making it a playful and sweet Slice of Life story.