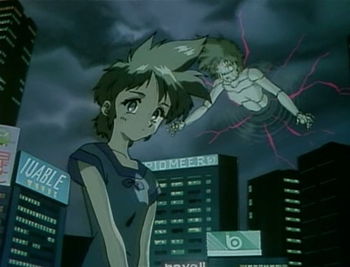 Tokiko Mima, nicknamed "Key," is a robot who has been raised as a human girl by her inventor/grandfather in a small, idyllic village in Japan. As her grandfather is dying, he tells her that she can become a human, provided she can make 30,000 friends before her battery runs out. With this, Key moves away from her idyllic village and heads for Tokyo.

Here she finds her best friend from Middle School, Sakura Kuriyagawa, working three different jobs to keep afloat. With her help as well as the help of Sakura's friend Shuichi Tataki (neither of which are convinced by Key's story), they plan to make Key into a Idol singer. They reason that someone following in the footsteps of Production Minos' biggest star, the mysterious Miho Utsuse, could easily gain the friendship of 30,000 people.

However, in times of extreme stress or danger, a second personality emerges from Key's emotionless form, revealing a girl that is not only more like a human, but one who appears to do supernatural feats.

Key the Metal Idol was released as a 15-episode OVA over a few years. The final episodes are nearly 90 minutes in length.

And if you think from the description that this is a cutesy kid's tale about making friends and becoming a real girl... you're going to be in for a rough ride.