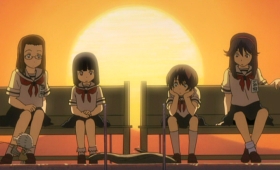 What would you do if your best friend suddenly announced that she had just become a god during lunch at school? Well, if you're anything like Mitsue Shijo, you'd probably assume the awkward and young-for-her-age eighth grader Yurie Hitotsubashi was joking with you, at least until you are approached by classmate and local shrine miko Matsuri Saegusa who also claims to have recognized little Yurie's “air of divinity”. Together they set out to uncover Yurie's supposed powers and place in the world of Japanese Shinto, where cities, places, objects and even concepts can all have their own minor deities and the local goddess may just well be a cute and unassuming middle-school girl. On the way they encounter a little more than they had bargained for.

Set in a faithfully reproduced version of Onomichi in the 1980s, the show has sometimes been called "My Neighbor Totoro the TV", for its lush, Ghibli Hills layout and casual insertion of a spirit world idling away between the cracks of the "real world". A surprisingly easy to enjoy series, provided with buoyant comedy where deification is less an earth-shattering shift of views and more of an after-school job - and far less stressful than being an insecure, easily flustered young lady whose biggest problem is still getting a certain boy to remember her name.