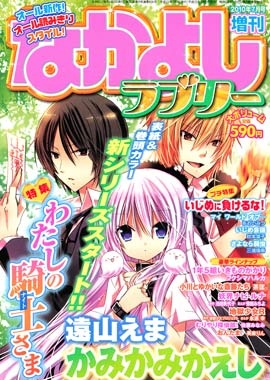 "I want... to be free!"
— Mashiro Kamitsuka
Advertisement:

Kamikami Kaeshi is a manga series by Ema Toyama. It ran in the shoujo magazine Nakayoshi from 2010 to 2016.

There is a religious ceremony called "kamigami kaeshi," where gods rest in a person's hair until their strength and power are rejuvenated. For the past thirteen years, Mashiro Kamitsuka has been living in a small room ever since she was three years old when she interrupted the ceremony by accident, and the gods chose to rest in her hair, as Mashiro is from the branch family. Until Mashiro returns all of the gods from her hair, she cannot see her mother.

The only contact Mashiro has with the outside world is what she can see through her window, the books she reads, and Hayate Kokumiya—her old friend and her hair-brusher. When Uno and Seno, two creatures Mashiro discovers, escape her room, Mashiro chases after them and overhears that her aunt, who's despised Mashiro for being in the branch family, has been instructing Hayate to seal the gods in Mashiro's hair the entire time, so that the gods can never return.

When Hayate attempts to get Mashiro back into her room, Mashiro rejects this, wanting to be free and no longer desiring to be confined in her room. Her wish is answered, and from her hair returns the god of fire—Hinokagu, who proclaims that he'll protect Mashiro.