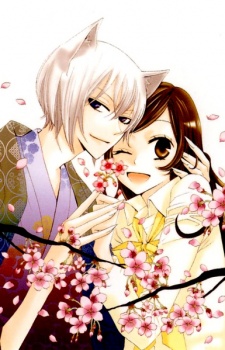 Kamisama Kiss (Kamisama Hajimemashita) is a Shoujo manga series created by Julietta Suzuki, which ran in Hana to Yume from 2008 to 2016. It begins when teenage Nanami Momozono's father skips town to escape his gambling debts and leaves her to face his angry creditors. Nanami is evicted from her home and ends up on a nearby park bench with no money and no family to turn to. She saves a strange man (Mikage) from a dog, and after hearing her story, the man offers Nanami his house as a thank you for saving him. Since she has nowhere else to go, she decides to check it out.

Following a map the man gives her, Nanami finds a rundown shrine instead of a house. Upon hearing ghostly voices, she quickly decides the shrine is haunted and tries to run, but is cornered by a pair of friendly shrine spirits and Tomoe, a bad-tempered Kitsune familiar. She discovers that Tomoe had been expecting his master, Mikage, who left twenty years ago for a trip into town and never returned. Tomoe is less than pleased to find that far from returning himself, Mikage has bestowed the kamisama kiss, or god kiss, on Nanami and gifted her the shrine, making her the local land god in his stead, and by extension, Tomoe's new mistress. Hilarity Ensues.

TMS Entertainment produced an anime adaption with Akitaro Daichi, of Fruits Basket fame, as the director. Junko Yamanaka, the art director from Case Closed, handled the character designs and it featured the voice talents of Shinnosuke Tachibana, Nobuhiko Okamoto and Suzuko Mimori. The first episode aired on October 1, 2012. A two episode OVA was released on August 20, 2013. Funimation began streaming the English dub on December 30, 2013. On August 01, 2014 it was announced the series would be getting a second season.