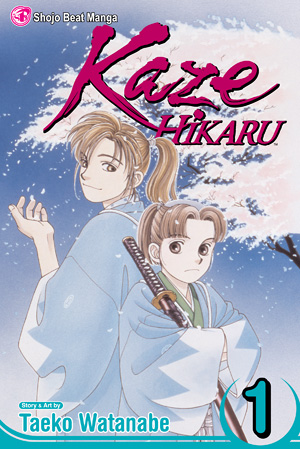 Kaze Hikaru (風光る) is a historical Josei manga by Taeko Watanabe, set during the time of the Meiji Revolution in the 1860s.

Cross-dressing heroine Tominaga Sei shaves the top of her head in a boy's hairstyle, takes on the name "Kamiya Seizaburo," and joins The Shinsengumi (a shogunate police force) in order to avenge her family’s death at the hands of anti-shogunate rebels. After her family’s murderer is killed, she stays with the Shinsengumi out of a sense of loyalty and duty, and because of her budding feelings for Shinsengumi Captain Okita Soji.

The series was published for almost 23 years, beginning serialization in 1997 in the shoujo magazine Bessatsu Shoujo Comic; it later moved to the josei magazine Monthly Flowers in 2002, where it continued until the end of its run in 2020. The manga was collected into 45 volumes. Kaze Hikaru is being published in English by Viz under the Shojo Beat banner.