Manga / Kids on the Slope 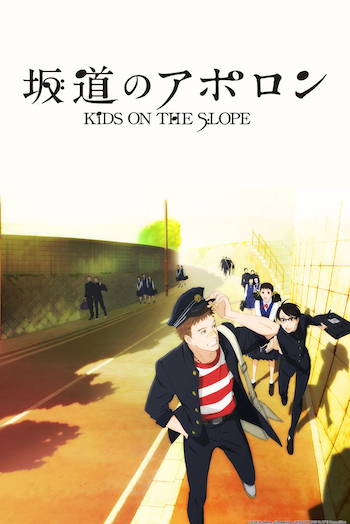 Kids on the Slope (Sakamichi no Apollonnote literally Apollo on the Slope) is a manga series by Yuki Kodama, which was serialized in the josei magazine Monthly Flowers from 2007 to 2012.

During the summer of 1966, Kaoru Nishimi (voiced by Ryohei Kimura) constantly moves from town to town and school to school due to his father's job. Because of his intelligence, his wealthy background, and his nausea problems, Kaoru has been alienated by his classmates and is subsequently seen as an outcast. When Kaoru transfers to yet another school, this time in Sasebo on the island of Kyushu (not far from Nagasaki), he expects the same things to happen as they always do. However, this time his luck begins to change as he meets seeming delinquent Sentarou Kawabuki (Yoshimasa Hosoya) and pretty class president Ritsuko Mukae (Yuuka Nanri), and the trio begin bonding over jazz music.

The manga won the 57th Shogakukan Manga Award for general manga. It was adapted to an anime series for the Spring 2012 Anime season, airing on the noitaminA block. The anime adaptation is notable for being directed by Shinichiro Watanabe and music composed by the acclaimed Yoko Kanno, as well as being the debut of MAPPA.