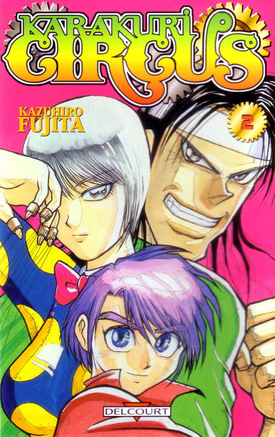 Karakuri Circus is a manga series by Kazuhiro Fujita (the same guy who did Ushio and Tora), which was serialized in Weekly Shonen Sunday from 1997 to 2006. The manga employs an unusual "choice-based" style, where it shows the two decisions a character can make at a pivotal point in a pair of boxes, a fancy arrow pointing to the decision made. The first decision is by Narumi, a sick kung-fu champ who decides that his job, passing out circus flyers, is more important than helping a young boy find the circus. He changes his mind when a group of well-dressed thugs attempt to kidnap the boy, as he rushes to save the day (still in his bear costume for work).

Then he finds out that the men after the kid, Masaru, are not men — they're dolls. Their controllers are hired by the relatives of Sadayoshi Saiga, the deceased CEO of Saiga Group, to which Masaru is the heir. Rescued by a mysterious silver-haired doll user named Shirogane, Masaru goes forth to find out just why the dolls and their controllers are after him.

A 36-episode anime adaptation by Studio VOLN and Studio Live aired from October 2018 to June 2019.

It has no relation to Karakuri Odette or Karakuridouji Ultimo, although the main characters act and even look quite similar.