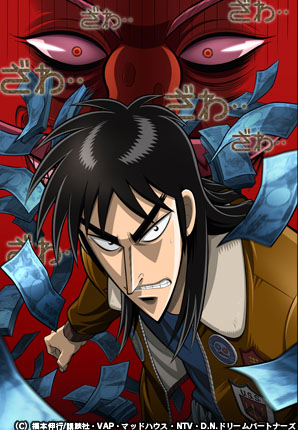 "The future is in our hands!"
Advertisement:

The year is 1996. After graduating from high school, the young Kaiji Itou has moved to Tokyo in hopes of finding a steady job. Three years later, he's still unemployed and in a state of depression. Kaiji wastes what little money he has on cheap gambles, alcohol and cigarettes on a daily basis. To feel better about himself, he sabotages expensive cars and collects their emblems. One of these cars belongs to Yuuji Endou, a yakuza with ties to the financial empire Teiai Corporation.

It turns out that Endou has been searching for Kaiji for a while, ever since he co-signed a contract for his friend Furuhata, which left him with a large debt. Kaiji is left with a choice; he must either spend 10 years working off the debt in a labour camp, or board a gambling cruise called "Espoir" (French for "hope") where he will be able to pay off the debt in one night... If he wins.

And that's just how the first series begins. Gambling Apocalypse Kaiji is probably the most famous work of Nobuyuki Fukumoto, a seinen mangaka. Starting in 1996, it has since then received critical acclaim for its ridiculous yet brilliant gambles as well as the complex psychological analyses of the characters. There are currently six series, the first two of which have gotten anime adaptations by Madhouse (much like Akagi before it), and eventually three live-action films and pachinko games. Kaiji also makes an appearance in Girls RPG Cinderellife, a dating sim by Level-5, for Nintendo 3DS. As of 2019, the sixth series is ongoing, with a total of 69 volumes released throughout the entire run.

A Spin-Off manga focusing on Tonegawa's life before Kaiji, Mr. Tonegawa: Middle Management Blues (Chuukan Kanriroku Tonegawa), got an anime adaptation in the Summer 2018 season which itself got a dub by Sentai Filmworks later in the year. Making it first of the Kaiji series to land in the west before the main series.