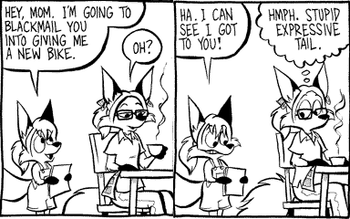 Reggie: What did you do?
Joy: I made blueberry pancakes.
Reggie: You make those when you feel guilty.
— Dead Like Me
Advertisement:

The idea is that Alice can tell something about Bob's emotional state because he is performing a significant but unrelated action. Expect Bob to deny it.

Writers will often use this to inform the audience what is going on with a character who wouldn't normally share his feelings.

See also You Can Always Tell a Liar and Pinocchio Nose for cases where Alice can tell that Bob is lying. See The Magic Poker Equation for poker tells. Supertrope to Heartbreak and Ice Cream ("when you're heartbroken you eat ice cream a lot"), Comfort Food and Post-Stress Overeating as well as Distressed Woodchopping.

Compare Character Tic, gestures/body movements that are done as a characteristic quirk, while this one is a bigger gesture and serves as a hint to their personality, and Characterizing Sitting Pose, when we can tell something about a character's personality from the way they sit. Also compare with Nervous Tics, where a certain habit can reveal that the character is feeling nervous. Contrast Out-of-Character Alert for when they do things they don't usually do (or the opposite of what they usually do) as a sign that something is wrong with the character.