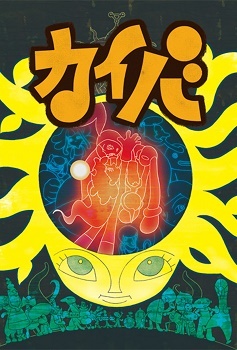 I will love you, even without my memories!
Advertisement:

Kaiba is an original 12-Episode Anime written and directed by Masaaki Yuasa and produced by Madhouse. It originally aired from April to July 2008.

One day a young man wakes up in an empty room, with no idea of who or where he is. His only clues are a strange marking on his stomach, a hole in his chest and a locket containing a blurry picture of a girl.

Soon Kaiba (his name, though he doesn't know it yet) finds out that in the world he has awoken to, memories can be stored on small cones called "chips". These chips can be transferred from body to body, making you essentially immortal. Bad memories can be removed, and good memories can be uploaded — for a price. Unfortunately, there are now more chips than bodies, and a huge gap between rich and poor.

It is in this universe that Kaiba travels from planet to planet, searching for who he and the girl in the locket really are.

And it's all set to a soundtrack that is hauntingly beautiful.

Please note that this has no relation to a guy who is likely to screw the rules because he has money.

As of May 2019, Kaiba is currently streaming on Crunchyroll.

Why you shouldn't eat too much.

Why you shouldn't eat too much.