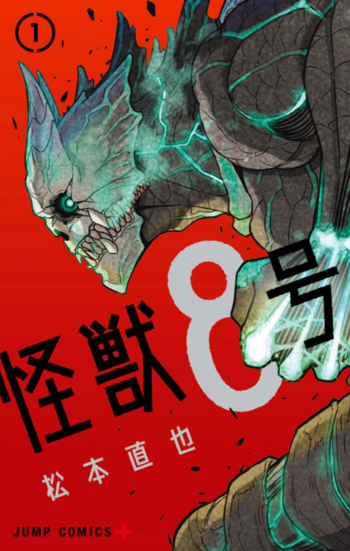 Kaiju No. 8 (a.k.a. Monster No. 8) is a manga by Naoya Matsumoto, set in a near-future Japan. Kaiju attacks are ravaging the world and Japan is the hardest hit country by these catastrophes. In order to keep the people safe, Japan now has an elite force of Kaiju Fighters who wear Powered Armor that are deployed every time a Kaiju attacks. Hibino Kafka once dreamed of joining the Corps, but he's passed the age limit. Now he works in a Kaiju Cleanup Crew.

One day, a new member of the crew, Ishikawa, chastises him for giving up on his dream and asserts that he's going to join the Corps. He also gives Kafka the good news that they've raised the age limit and Kafka can reapply. The two form a strong bond once a Kaiju attacks and Kafka manages to hold it off for long enough for Ishikawa to come back armed and fight with him until the Kaiju Corps arrive. The two then resolve to join the Corps together.

However, things become more complicated when a tiny Kaiju-like parasite shows up in the hospital where the two are recuperating. It announces "I found you!" and promptly climbs down Kafka's throat. Kafka is then turned into a monstrous human-sized Kaiju.

Kafka briefly falls into despair, believing that he truly can't ever join the Kaiju Corps, but after saving a young girl and her mother from an attacking Kaiju he learns how to return to his human form. Outwardly, anyway. He and Ishikawa work together to keep his secret and join the Corps, but things won't be easy, as the entire country is on the lookout for the mysterious escaped monster, Kaiju No. 8, that Kafka's Kaiju form became known as. Worse yet is that given the evolving dangers involved in the Defense Corps job, Kafka has to more than rely with discretion on the advantages of his new powers to help turn the tides of war between Kaiju and humanity; and all while keeping that a secret from the latter.

is available for free on Manga Plus. An anime adaptation was announced in August 2022.