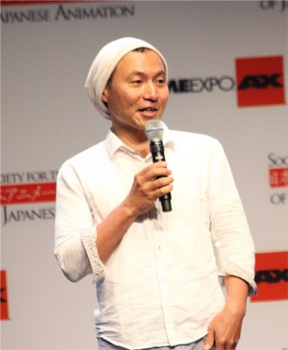 Masaaki Yuasa (born March 16, 1965) is one of the most prominent figures of alternative anime. His visual style is immediately recognizable as it significantly differs from standard anime iconography and rather displays influence from Western animation, particularly American cartoons as well as Russian and European avant-garde animation. He learned his profession in London, hence the international style with extensive manipulation of perspective, bright colors, exaggerated facial expressions and fast-paced action sequences. He has been compared to independent animator Bill Plympton, cartoon savage John Kricfalusi, the films of Mushi Productions and George Dunning.

He's not only considered a virtuoso animator and art director, he also directed a variety of own films and series himself, brought to life with Madhouse and Studio 4°C. Some of his works achieved cult status among anime fans, most notably Mind Game and The Tatami Galaxy.

In 2013, Yuasa received an offer to direct an episode of Adventure Time. He teamed up with frequent collaborator Eunyoung Choi in order to form a studio to produce the episode. This studio became Science SARU, which has produced all of Yuasa's works since then. Yuasa left Science SARU on good terms on March 25, 2020, just three days after the series finale of the anime adaptation of Keep Your Hands Off Eizouken!, which he directed; Choi has since taken over the position of CEO. His final project with the studio, Inu-Oh, is due for release in 2021.

As Art Director or Key Animator: