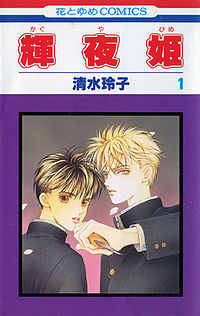 Akira Okada is your typical schoolgirl... who looks like a boy, is crushed on by all her female classmates, and was adopted. Oh, and by the way, her attention-starved adopted sister is very attached to her, and her artist of an adopted mother makes her model for her in the nude. Among other things.

This all changes when two boys appear out of the blue to take her to a mysterious survival camp on deserted Kabuchi Island, where they claim was the orphanage they all grew up in, together with a bunch of other kids... as human sacrifices for the unearthly and cruel Princess Kaguya.

And from there, it all goes downhill, mixing myth, sci-fi, murder mystery and complicated romance going every which way no matter the gender. Expect lots of Les Yay, No Yay, Squick, Mind Screw, and very twisted moral issues.

A manga by Reiko Shimizu, very loosely based on The Tale of the Bamboo Cutter. It ran in LaLa from 1994 to 2005.