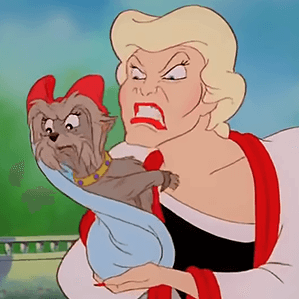 "Even the tiniest Poodle or Chihuahua is still a wolf at heart."
— Dorothy Hinshaw Patent, Dogs: The Wolf Within
Advertisement:

There is a particular kind of little yappy dog who tends to get on a lot of people's nerves.

The thing is, as theorized by no less than Gary Larson of The Far Side fame, it might not be the dogs that people have a problem with so much. It may actually be the rather specific kind of person who tends to have little yappy dogs named Mr. Muffykins (or something equally ludicrous). In fiction, Idle Rich old ladies or Grande Dames in particular tend to have a small pack of little fluffy creatures. In older fiction, said dogs will have foul little hearts and minds deep within their fluffy little bodies, to go along with Aristocrats Are Evil archetypes. Nowadays, they're often the preferred pet of the Rich Bitch.

Newer versions of this Trope may have their roots in a very odd phenomenon. Increasingly, it seems as if some people (generally older and either childless or suffering severe empty-nest syndrome) are confusing lap dogs with furry little children. A very different kind of Pinocchio Syndrome seems to be in effect here; think of how lonely and delusional Geppetto had to have been to treat a cat, a goldfish, and an inanimate hunk of wood as his children. Alternatively, they are either Corrupt Corporate Executives or Diabolical Masterminds who like to have their favorite canine furballs as Angry Guard Dogs or Right Hand Attack Dogs at their leash.

In any case, we now live in a world where, if you wanted to do so, you could get your terrier's nails painted as she gets fitted for a thousand-dollar collar. Never mind the fact that dogs are very obviously (you'd think) not little furry humans, and have markedly different wants and needs. Your terrier would be just as happy — and probably more happy — with an inexpensive, comfortable fabric collar — to protect your Evil Plan progression, and an afternoon playing with you in the park.

So an increasingly common subversion has been to show the dog itself as a sympathetic character; a victim of too much misguided attention with a master who is delusional if not outright hateful. While the trope is older than this, one has to wonder how many of these are influenced by Paris Hilton's dog.

For the record, most people in reality who have small dogs are more sensible even when they do think of them as "furbabies". Tiny "purse" dogs are a matter of convenience, especially in an urban environment. A smaller dog needs much less space to be happy, and they also tend to live longer than larger breeds.

Expect this character to be Fluffy the Terrible and Cute, but Cacophonic, whether friendly or evil. If they can back up their bark with bite, this makes them a Killer Rabbit or Super-Persistent Predator, overlapping with Beware of Vicious Dog moment. If they can't but they try to fight anyway, they are a Boisterous Weakling. If they are used as active fighter pets, that overlaps with Right-Hand Attack Dog. Compare The Napoleon, Angry Guard Dog, Savage Wolves, Cats Are Mean and Psycho Poodle, and contrast Cute Kitten, Precious Puppy and Big Friendly Dog. And please don't Eat the Dog... as there's barely enough meat here for an hors d'oeuvre. The really annoying form of Mister Muffykins can make a Kick the Dog very satisfying indeed.

If the Mister Muffykins is also a Hellhound, be VERY AFRAID.

Contrast Men Like Dogs, Women Like Cats, to which small purse-sized dogs tend to be an exception. If they are actually named "Mister Muffykins" or something similar, they're a Formally Named Pet.