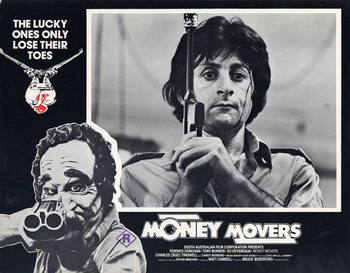 Money Movers is a 1978 Australian crime action drama film directed by Bruce Beresford. The film was based on the book Money Movers by Devon Minchin, founder of Metropolitan Security Services.

On the day that one of his armoured cars is robbed, Lionel Darcy receives an anonymous tip off that his multi-million dollar counting house will soon be hit. A corrupt detective passes this information to crime boss Jack Henderson, who sees a business opportunity. He takes control of the robbery plot from a senior Darcys employee, Eric Jackson, but tough ex-cop Dick Martin makes sure the raid does not go according to plan.