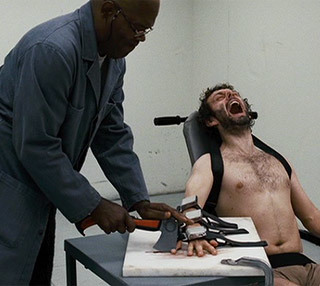 The hero is strapped to a chair. They are told to talk by the villain. If they don't, the henchman standing beside them will start cutting their fingers off. One by one. If they aren't talking by then, he'll move onto other areas.

This is a quick way to show the interrogation subject that you are not screwing around and will cross moral /legal boundaries by inflicting permanent damage. Pain is transient, but starting with small mutilation announces to the victim that you will move on to progressively worse, permanent damage if they don't talk.

One of the many forms of Cold-Blooded Torture or the Jack Bauer Interrogation Technique. See also Fingore and Knee-capping, which this tends to include.