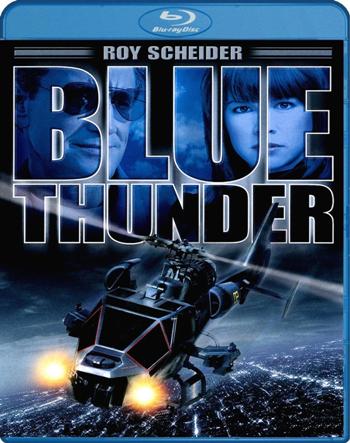 Blue Thunder is a 1983 action film about a police helicopter pilot who discovers a Government Conspiracy to use an experimental Black Helicopter for urban riot control. It earned an Academy Award nomination for Best Film Editing and kicked off a subgenre of Cool Helicopter shows including a short-lived 1984 TV series of the same name and the enormously more popular Airwolf.

Frank Murphy (Roy Scheider) is a Vietnam War veteran who flies helicopters for the Metropolitan Police Astro Division in Los Angeles. In his time off, he deals with a failed relationship and his fears of going crazy, based on flashbacks he keeps getting to a traumatic 'Nam mission. In the course of training a new observer, rookie Richard Lymangood (Daniel Stern), he witnesses what appears to be the planned murder of a city councilwoman, but when he tries to report his suspicions, he's grounded due to earlier "extracurricular" activities.

Murphy tries to follow up on the killing on his own time, finding a scrap of paper that calls attention to something called the "Project THOR". Before his investigation can bear fruit, however, he's called up and his suspension is lifted so that he can participate in field testing of a new helicopter. Code-named "Blue Thunder", it's a heavily armed and armored machine with advanced sensors and stealth technology designed for urban riot control. He also meets his nemesis, Colonel Cochrane (Malcolm McDowell), a gung ho military test pilot who knows Murphy from Vietnam, and not in a friendly way.

During their first flight in Blue Thunder, Murphy and Lymangood decide to experiment with its stealth and sensor capabilities, while at the same time using the onboard computer to investigate THOR. They end up uncovering a conspiracy to incite unrest in the city's ghettos in order to showcase the new helicopter. When the bad guys realize they've been found out, all bets are off. The two must run for their lives with the evidence, and Murphy is forced to steal Blue Thunder and fight a high-stakes aerial battle over the city.