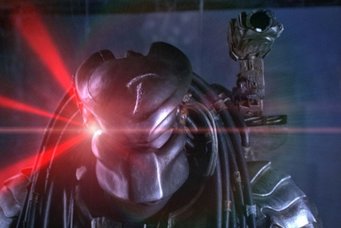 With the laser sight, the Predator can tell his Shoulder Cannon exactly where to fire.
Advertisement:

A Helmet-Mounted Sight is essentially a Heads-Up Display that tells your fighter/chopper where you want the bullets or missiles to go. It also can show what friendly or enemy fighters are equipped with to provide Stat-O-Vision. This can appear in modern or sci-fi settings, but only the most elite soldiers or very powerful single combatants are likely to have it equipped.

This trope is becoming more Defictionalized as time goes on.