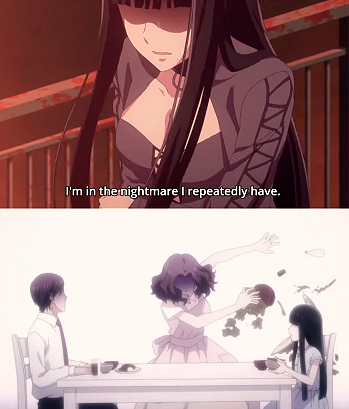 Wanda: I don't want to go back there.
Agatha: I know you don't. But it's good medicine, angel. The only way forward is back.
— WandaVision
Advertisement:

A specific Sub-Trope of Dark and Troubled Past, Flash Back, and Tragic Hero.

When a movie starts after The Hero suffers a great personal tragedy that motivates them to go on a quest for justice or revenge, the audience will be curious about what exactly happened to this guy or gal to make them such a nigh unstoppable badass. An Opening Scroll may work for a Space Opera, but not here, where it would trivialize such a personal hurt. So directors instead use a Flash Back to deliver this Exposition.

It'll begin with a Happy Flashback, a snapshot of a happier time with the people who have since been killed. The flashback will be bright, much brighter than the drowning-in-dark main cinematography, and use a non-desaturated (or even super saturated) lively color palette. It will sometimes use softened edges and warm gold tones, when not in sepia, and have a sweet but slightly jarring melody (preferably a music box) or obviously sad fare. Then the disastrously happy loved ones will be killed as the happy flashback suffers a Sugar Apocalypse into a gory bloodfest. For extra pathos, the hero will be helpless to save them or Forced to Watch.

We aren't being over-dramatic here; these flashbacks run the risk of portraying the hero's pre-tragedy life as more nauseatingly happy than a Norman Rockwell painting on distilled Glurge. This may be intentional, since the net effect is the hero's life effectively goes from living in a Sugar Bowl to a Crapsack World.

Not all Troubled Backstory Flashbacks are given all at once though. A director may space out the flashback in order to keep the exact nature of the tragedy a suspenseful secret. To this end it will be be shown in snippets that get progressively longer, until near the end of the movie when the hero breaks down and narrates the entire flashback to a friend or Love Interest. For extra creepy factor the flashback will be a garbled mess mixing the happy memory and the bloody aftermath.

See also Happier Home Movie and You Remind Me of X.