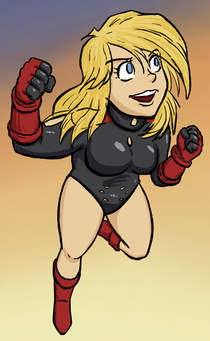 You know you love it!

(pronounced "dah-see-en", according to creator Neil Purcell) is the superheroic identity of Michelle Knight, an aspiring reporter for an entertainment magazine who after exposure to the Dasien virus developed Super Strength, Super Speed and Nigh-Invulnerability. Her best friend is Parker Lynn Bailey, another journalist. And the Crimson Gestalt, a fierce superhero-hunting extermination squad led by Lord Crimson, is the most prominent menace.

, under her original character design as well as alternate costume design in The Crossoverlord and The Blonde Marvel. She also cameos in Crossoverkill, but as her alter ego, Michelle Knight.

The comic comes and goes out of hiatus but maintains an ongoing storyline, usually first run on its DrunkDuck mirror.