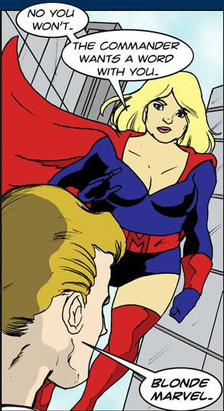 follows the heroic adventures of Angela Zaftig, the well-endowed guardian of Municipal City. When not fighting crime, Angela lives with her husband, Harold Braun, and their two children, 13-year-old Nicholas and 17-year-old Cassandra. Another son, Adam, is deceased.

Angela received her costume and ring from Commander Marvel, the original defender of Municipal City who left when a crime wave arose in New York. After failing to dissuade Angela from becoming a superhero, the commander decided to help her to the best of his ability.

Quoting from the creator's blog:

Warning: The blog entries on the site tend to be sexually explicit, more so than the comic itself.

The Blonde Marvel contains examples of: