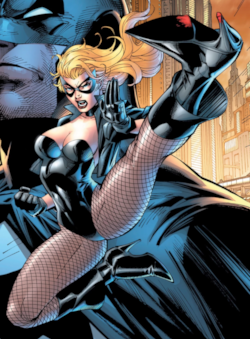 Stylish, comfy, and excellent for a night of Crime Fighting and a Date, Dinner, and Coffee later. Blood Removal sold separately.
"Ugh! Can we have a serious talk about how Weiss fights in these!?"
— Ruby Rose, objecting to wearing heels, RWBY
Advertisement:

Thanks to Sex Sells and Rule of Sexy, Action Girls will often wear high heels to complement the rest of their Stripperiffic outfits.

In comics this is often Depending on the Artist: artist A will use it in moderation, artist B will draw practical shoes, but artist C will insist on drawing high heels on all female characters regardless of reason, situation, or even if it's her usual style. While this can be part of the Most Writers Are Male trend, this tends to appear often with Female Writers as well, for various reasons. note Just for reference, any heel less than - or of - three-and-a-half inches is excluded from this trope.

There is a fierce debate over the use of this trope, ranging from a realistic point (they are very hard to balance, tiring to walk and can damage the feet and spine by prolonged use in real life, to say nothing of trying to actually fight in them), if it's a misogynistic tool in a male-dominated medium just to make the heroines more appealing, or if this is only another trope in fantasy and comics, no more unrealistic than any other.

Not to be confused with a combat stiletto, nor shoes being directly used as weapons. See Rule of Sexy, Impossibly Cool Clothes and These Tropes Are Made for Walking. Compare Kick Chick and With My Hands Tied, as this trope may sometimes be used together with the said two. Tends to overlap with High-Heel Power.