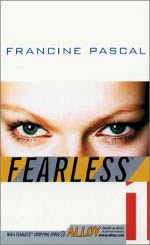 The girl born without the fear gene.
I am powerful. I am graceful. I am angry. I am pure. I am raw. I am alone. I am Gaia. I am just like you. But I'm not - I am Fearless.
Advertisement:

Fearless is a young adult novel series by Francine Pascal. The story follows Gaia Moore, a teenager who was born with the inability to feel fear, as her terrorist uncle "Loki" messes up her life.

In 2003, the series was loosely adapted into a TV show starring Rachael Leigh Cook in which Gaia is an FBI agent. Only one episode was filmed; it never aired.

A short follow-up book series in which Gaia joins the FBI, Fearless FBI, was published in 2005.