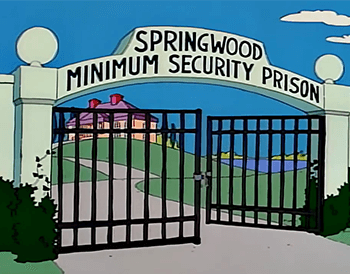 "In the big rock-candy mountain
all the jails are made of tin,
And you can walk right out again
as soon as you are in..."
— "Big Rock Candy Mountain"
Advertisement:

In the spirit of Joker Immunity, the judicial/incarceration system in fiction will be just as worthless as the police. It may keep certain villains off the street so that the heroes just have to deal with one at a time (except for those occasional "teaming up" deals), but expect them to bust out real soon or find a very sympathetic parole board.

In the real world, voters would be demanding crackdowns. In fictionland, the same person can break out hundreds of times and nobody gets fired. In some cases, they also have policies against re-arresting escaped Villains Out Shopping unless they commit another crime during the same episode.

Perhaps a necessity in stories which feature a Rogues Gallery, since you need to find a way to keep bringing them back but have the heroes seem somewhat effectual. This was particularly true in comics in the days when The Comics Code held sway — the villain had to be clearly defeated at the end of each and every appearance, requiring an escape from either being Put on a Prison Bus or apparently killed before he could show up to vex the heroes again.

Often involves The Guards Must Be Crazy. See also Unsafe Haven, where instead of a prison being laughably easy to break out of, a sanctuary is laughably easy to break into. See also Widely Spaced Jail Bars, an animation convention that is sometimes comically played with, resulting in this. Contrast Might as Well Not Be in Prison at All (where escaping isn't even necessary) and The Alcatraz (which was successfully inescapable before the heroes or villain came along).

Not to be confused with "Get out of Jail Free" Card.

Daggett could've escaped his bird cage prison at any time by exiting the unlocked door. Of course, he's too stupid to think of that.

Daggett could've escaped his bird cage prison at any time by exiting the unlocked door. Of course, he's too stupid to think of that.