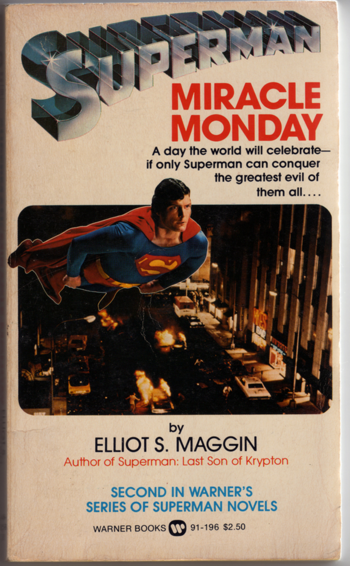 Miracle Monday is a novel about Superman written by Elliot S! Maggin who had previously written another Superman novel, Last Son of Krypton. It came out around the time of the second Superman movie, but it's not a novelization of it, but rather a separate story taking place in the comic book's continuity. Maggin based it on a similar story he wrote once for the Superman comics.

The novel is about Kristin Wells, a far-future descendant of Superman's Pal, Jimmy Olsen, who comes back in time to find out the origin of the holiday known as Miracle Monday, a day that commemorates how Superman gave every human being hope. Meanwhile, Lex Luthor discovers the physical basis for magic and uses that knowledge to escape prison. In so doing, he opens the way for C.W. Saturn, the Agent of Hell, to enter the Earth-plane. Saturn takes possession of Kristin Wells and proceeds to wreak havoc, offering Superman a stark choice: the only way to stop the chaos is for Superman to break his highest vow and take the life of Kristin Wells. Superman must find a way to deal with Luthor's schemes while confronting the Devil himself, all while holding true to his own highest values.

This novel is best remembered for introducing the character of Kristin, who would go on to become Superwoman in the comics, as well as containing perhaps the most awesome moment of Superman's career: outsmarting The Devil himself!