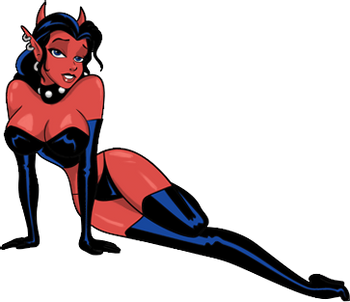 Not all demons are Big Red Devils or massive draconic beasts who seek to terrify or destroy every human they meet. Some fiends like to take more subtle approach to their machinations, and take the form of a beautiful woman or a handsome man when going among mortals.

Demons often want to tempt mortals into committing sin, and one of the ways they do it is through adopting a pleasing form, linking the metaphorical seduction towards evil that a person faces is to a literal seduction attempt. While sometimes it will be as blatant as a succubus or incubus trying to jump the hero's bones, in others it will simply be an additional way to throw the hero off their game by taking a form the demons knows they're attracted to, thus making it harder for them to bring themselves to hurt the demon.

Often overlaps with Divinely Appearing Demons (if they don't have pointed horns and a tail instead), Face of an Angel, Mind of a Demon (unless they're a Noble Demon). If female, they're often Cute Monster Girls, with their only outwardly demonic features being bat wings, horns, and a tail. A subtrope of Our Demons Are Different.