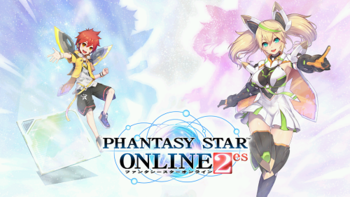 Phantasy Star Online 2esnote The "es" stands for "essence", which is to be pronounced like the letter S, not E-S is a free to play mobile game/companion app spinoff of the hit MMORPG Phantasy Star Online 2, and the first ever Phantasy Star title to arrive on mobile devices. It was released for Android devices on April 7th, 2014, and for iOS on May 14th, 2014.

In the future, the discovery of "Photons", a light particle omnipresent throughout the universe, revolutionized modern man and gave birth to "Oracle", a space exploration group dedicated to scouting out planets fit for colonization. When a natural enemy of Oracle known as the Darkers surfaced across the universe, the organization known as "ARKS" (Artificial Relicit to Keep Species) was formed to carry on the will of Oracle while eradicating the Darker threat. Further advancements as the result of the work of the Central Research Department have lead to the development of the "Chip" system, a revolutionary combat augmentation product that allows ARKS to harness the latent abilities of various Chips to further their mission against the Darkers.

Like PSO2, the game is split up into various story arcs, referred to in-game as "Seasons". Each Season brings with it major gameplay enhancements, making it similar to Episodes in terms of expansion.

Being the "essence" of PSO2, gameplay takes on a similar action RPG form with some simplified mechanics while introducing Chips. Chips acquired through gameplay or a gacha serve to improve the player's performance through numerous effects, and can be upgraded or evolved with the infusion of other Chips. Aside from the original scenario and gameplay, players can also engage in connectivity features with PSO2, such as a special 100-slot Storage Box shared between games, as well as Quick Searching for bonus items and feeding MAGs and Pets remotely.