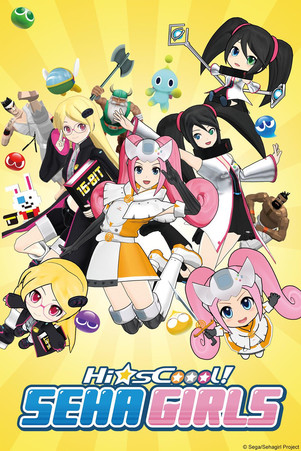 The girls of Hi-sCoool! SeHa Girls. From left to right: Mega Drive, Dreamcast, and Sega Saturn.
"Haneda, Tokyo. Next to Ootori, the symbol of the ward, is Sehagaga Academy. This is the story of the struggle of the girls who attend this school."
—Opening narration
Advertisement:

Hi-sCoool! SeHa Girls is an anime television series that first aired in Japan via Animax Japan on October 8, 2014 as part of the Fall 2014 Anime season. It was produced by TMS Entertainment with the show being directed by Sōta Sugahara. This is based on the overall Sega Hard Girlsnote short for "Sega Hardware Girls" multimedia franchise developed together by Sega Japan and Dengeki Bunko. It's scheduled to air a total of 13 episodes. It's also available for online viewing on Crunchyroll for legal viewing in North America. In November 2016, a DVD of the complete series was released in Japan containing a bonus episode. The series was licensed to Discotek Media for a North American physical release, and was released in a Blu-ray/DVD combo in May 2017, missing the bonus episode.

The show centers on the various Sega consoles as anthropomorphic students as they go to a Sega-centric school called Sehagaga Academy, located in Haneda, Tokyo. The students consist of Dreamcast, Mega Drive, and Sega Saturn as they work under the instruction of their teacher, Center-sensei, in order to earn enough credits to graduate from the academy. The Bonus episode also features Master System, Mark III, Mega Drive 2, Robo Pitcher, V-Saturn and Hi-Saturn.

See the Neptunia series, which has a similar premise (various game consoles are shown as anthropomorphic persons), enough that it had a Crossover with the Sega Hard Girls. A separate character list for all of the Sega Hard Girls can be found here.