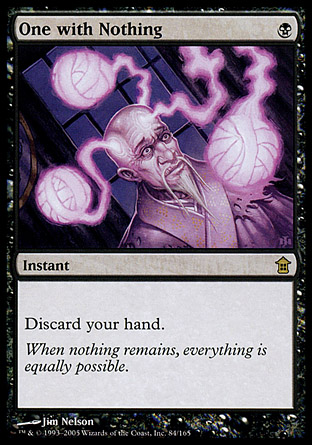 The gold symbol on the middle-right says it's a rare card. The text says the developers are laughing at you.
Advertisement:

There are the awesome, powerful rare cards that you're eagerly praying to see when you crack open a booster pack... and then there are these. A Junk Rare is weak, narrow, useless, or otherwise undesirable, and to make matters worse, it's rare, meaning that even if you wanted to get rid of it, you can't because there's always the possibility that you'll never obtain another copy of that card. So much for Power Equals Rarity.

Naturally, one player's Awesome, but Impractical is another player's Who Cares How Impractical It Is, It's Awesome! And one should never underestimate the power of Narm Charm. And 100% Completion. It's also possible that someone may even find a use for it and it turns out it's not as bad as once thought. If it gains enough notoriety, it ensures that it'll never leave the players' minds.

This is not exclusive to Collectible Card Games—Random Drops can qualify as well, and when they do they are often also Better Off Sold.

May be Awesome, but Impractical, Cool, but Inefficient, or a Useless Useful Spell. If it's only available through a special promotion, it's a Promotional Powerless Piece of Garbage. Not to be confused with Commonplace Rare, which is when something that would be worthless junk in real life is useful and difficult to obtain in a game. Contrast with Boring, but Practical when something is very commonplace but useful.