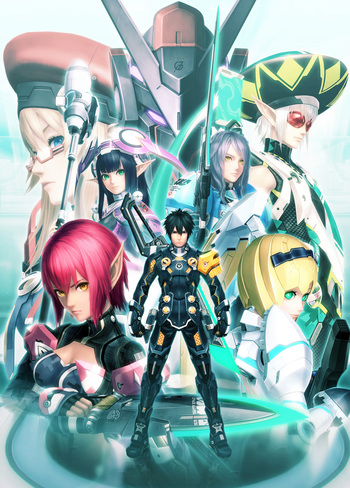 Developed alongside Phantasy Star Portable 2 Infinity for the 10th anniversary of Phantasy Star Online, Phantasy Star Online 2 is a free-to-play MMORPG from SEGA's Phantasy Star series, and Spiritual Successor to the original Phantasy Star Online. Using all of what they learned from the Universe series, Sega has built the game in a style much like Online's, but incorporating features and aesthetics from Universe. After several alpha tests and a few beta tests, the game was released for PC on July 4th, 2012. A version for the Playstation 4 was released on April 20th, 2016, supporting cross-play capabilities with its PC counterpart. In addition, a cloud gaming service version known as Phantasy Star Online 2 Cloud was released for the Nintendo Switch on April 4th, 2018, with that version later released for the PC on December 19th, 2018. After originally being announced in 2012 before being subsequently forgotten about, a Western release of the game was officially re-announced at E3 2019 for the Xbox One and officially launched on April 16th, 2020, with a PC release on May 27th, 2020. There was also a PS Vita version that was released on February 28th, 2013 and ran for over seven years before shutting down on September 16th, 2020, due to waning support for the system and Sega wanting to break free of the Vita’s limitations to create better content.

Sometime in the future, mankind has undergone a technological revolution thanks to the discovery of a new type of energy particle called "Photons". The pinnacle of this age was the creation of "Oracle", a fleet of Colony Ships whose purpose was to explore the universe in search of new planets to colonise. Yet deep in the abyss of space Oracle soon encountered a deadly threat: the Falspawn, an eldritch race who spread across the universe like a virus, infecting and mutating whatever they come into contact with. When the people of Oracle discovered that Photons were the antithesis to the Falspawn, they gathered together those talented in photon manipulation into a new organsiation known as the "ARKS" (Artificial Relicit to Keep Species). Using the latest in photon-powered weaponry and equipment, the ARKS are tasked with holding the front line against the Falspawn and investigating the root of their evil.

Much like its predecessors, the game has been divided into numerous "Episodes"; however, unlike previous entries, where an Episode would denote a major expansion pack, Episodes in PSO2 serve to split the game into various "seasons", each featuring major content updates and a unique style.

The game is notorious for its troubled localization history; a North American version of the game was originally announced for release in 2013, but after 2013 came and passed SEGA stayed quiet on the topic and most fans presumed that the localization had been quietly cancelled. For the next seven years SEGA would evade the topic of the PSO2 localization by simply passing it off as "delayed", with most known outlets of official information closing as the years passed. However, SEGA would then shock the world by re-announcing the game's localization at E3 2019 for the Xbox One and PC in 2020, featuring all content released in the Japanese version up to that point. Talk about your eight year wait! A closed beta test for the Xbox One was held in early February 2020, which showed how dedicated Sega was to bringing this game to the rest of the world, with the addition of an English dub (with the original Japanese dub still available as an option).

Between the failed original localization and the 2020 release, there was one other known attempt at bringing the game outside of Japan: the Southeast Asia/Taiwanese version, released in English as well as local languages in 2014. This version was licensed out by AsiaSoft, a company infamous in the region for its heavy Allegedly Free Game practices, and the SEA/TW version was subsequently plagued by issues including an IP block for the SEA region to prevent people from play the Japanese version, ARKS Cash inflation, Cut-and-Paste Translation, and egregious pay-to-win encouragement among other things, and by 2017, the SEA/TW versions quietly shut down. It wasn't all for naught, however; this version of the game also introduced content not featured in the original Japanese version, some of which was backported to the original game as new cosmetics and gear.

Also in the interim, a large-scale Fan Translation project sprung up by the name of ARKS Layer

; this project is dedicated to the translation of many of the game's major elements, and this has contributed to a decently-sized influx of overseas players being introduced to the Japanese version of the game. The size of the foreign player-base has not gone unnoticed by the development team

; they are generally rather appreciative of foreign interest, and are not against overseas players joining in on the fun.

In 2020, SEGA announced a full-blown sequel for the game in the form of a massive update called Phantasy Star Online 2: New Genesis, which released worldwide on June 9th, 2021. Since the new update still runs on PSO2 as a base, the original game will continue to persist and all content remains playable, but various features and functions have been scaled back considerably and no new content is planned for PSO2 for the foreseeable future, thus unofficially "ending" the game's update cycle.