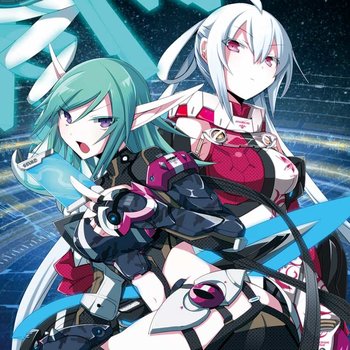 Sometime in the future, mankind has undergone a technological revolution thanks to the discovery of a new type of energy particle called "Photons". The pinnacle of this age was the creation of "Oracle", a fleet of Colony Ships whose purpose was to explore the universe in search of new planets to colonise. Yet deep in the abyss of space Oracle soon encountered a deadly threat: the Darkers, an eldritch race who spread across the universe like a virus, infecting and mutating whatever they come into contact with. When the people of Oracle discovered that Photons were the antithesis to the Darkers, they gathered together those talented in photon manipulation into a new organsiation known as the "ARKS" (Artificial Relicit to Keep Species). Using the latest in photon-powered weaponry and equipment, the ARKS are tasked with holding the front line against the Darkers and investigating the root of their evil.

While the manga's canonical status in the franchise has never been directly addressed, plot points and scenes from the manga were combined with existing canon and adapted into The Anime of the Game, Phantasy Star Online 2: Episode Oracle.