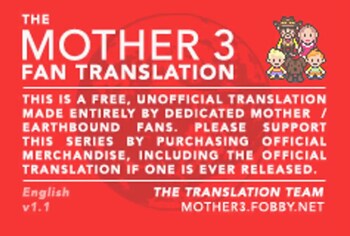 A phenomenon that goes hand-in-hand with Emulation, Fan Translation (or "Fanlation") is pretty much what it says: The translation of games that only appeared in other languages (almost always Japanese) into the player's native language (almost always English) as a fanmade Game Mod or ROM hack.
Advertisement:

This most often occurs on Japanese RPGs that were released prior to Final Fantasy VII. Before that game's breakout success, American publishers shied away from Japanese RPGs because of their relatively poor sales compared to action games. In fact, the fan translation hobby largely began from the efforts to localize Final Fantasy V and Trials of Mana (then known to international audiences by its Japanese name, Seiken Densetsu 3), Square games that were heavily hyped as coming to the US, then mysteriously canceled. Some older RPGs were even re-translated due to the "quality" of the translations ranging from a mere "Blind Idiot" Translation to an outright Translation Train Wreck.

Licensed Games can also receive this treatment. Often, it takes years before an anime series is brought over and becomes popular in the West, while the Japanese games based on that series are seen as obsolete by the distributors.

While no legal dispute over a fanmade patch has ever occurred, a handful of cease-and-desist orders have been issued regardless of any actual validity. Since ROM patches contain no assets from the original game and no derived assets that are viable without it, no likely basis for arguing infringement is known. The resulting translated ROMs themselves, of course, fall under the same rules as any other ROM dump if distributed (hence why ROM hacking sites generally only distribute patches, requiring players to find the original ROM elsewhere and use a patching program to actually use the patch).

Plus, No Export for You already garners enough bad PR, exacerbating it among fans would definitely not be a good idea.

See also Fansubs for the Anime version and Scanlations for the manga version.

Please note that people aren't getting paid for this and are Doing It for the Art (though they may have professional translation work as their main occupation, as with Clyde "Tomato" Mandelin, the head translator of Mother 3, who does fan translations solely as a hobby in his spare time); Development Hell is common, and Vaporware might happen occasionally (an example of the latter being the aforementioned Clyde Mandelin's abandoned translation of Tomato Adventure, though he did release the source code for his work in case anyone else wants to give it a shot). Any ongoing projects may take VERY long.