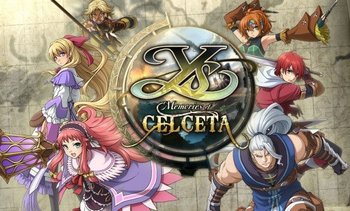 A Video Game Remake of the fourth game in the Ys franchise, Ys: Memories of Celcelta is the third version of Ys IV, preceded by Ys IV: Mask of the Sun and Ys IV: The Dawn of Ys. It was released for the Play Station Vita in 2012, and was ported to the Chinese version of Microsoft Windows in 2015. However, a Steam port was released on July 25, 2018, done by Hyde Inc., with XSEED Games handling the English localization, as well as the publishing. On May 16, 2019, the game was released on the PlayStation 4 as Ys: Memories of Celceta Kai.

Roughly a year after his adventures chronicled in Ys II: Ancient Ys Vanished – The Final Chapter, the story starts with Adol Christin mysteriously suffering from amnesia, wandering aimlessly in the streets of the "Frontier City of Casnan" in the land of "Celceta". Information dealer Duren claims to have met him before; not knowing about his true identity and last objectives in Celceta, Duren provides Adol assistance in searching for his memories around the "Great Forest of Celceta", his last known location, to awaken the slumbering adventurer spirit within him and restore what he has lost.

Like its predecessors, Memories of Celceta is an Action RPG: most of its game-play mechanics are borrowed from Ys SEVEN, such as having an active party of three characters (one controlled by players, the others assisted by AI) whom players can switch between at any time during or outside of combat, specific attack skills and Limit Breaks for each party member, and the "Flash Guard" maneuver, where parrying an enemy attack will nullify all damage dealt by that hit from the attack and guarantees that a Counter-Attack will be a Critical Hit if made just after the parry. However, Memories of Celceta also introduces "Flash Move" - by dodging enemy attacks right before it hits characters, not only will the attack be negated, but enemy movement will be slowed down momentarily for players to get a bead on them. Finally, the game allows one to reduce damage via blocking, something neither Ys SEVEN and the succeeding Ys VIII: Lacrimosa of Dana and Ys IX: Monstrum Nox allow.