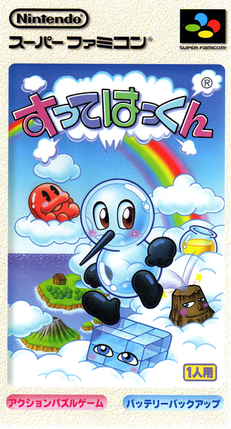 Cute characters, frustrating game.
While Hakkun and his friends were residing on their island, the "Happiness Rainbow", the island's symbol, suddenly collapsed into several shards. The pieces scattered across the island, making collecting them all seem hopeless. Then, at that very moment, someone rose. It was the good-natured Hakkun, or Sutte Hakkun. He decided to take on the task of retrieving the rainbow shards scattered across the island. And so, Hakkun, though reluctantly, decided to begin his journey to search for the rainbow shards.....
— The introduction to the first "Event Version" of the game.
Advertisement:

The game involves Hakkun, a strange blob-like humanoid with a syringe-like beak who must collect scattered rainbow shards in order to restore the Happiness Rainbow to the island he lives on. Within every stage, you'll control Hakkun and use his ability to inhale and exhale objects and paint to solve puzzles. These puzzles range from relatively simple to downright ridiculous, and there are ten per world, with a Bonus Stage for you to try if you manage to complete them all.

The game was popular enough in Japan to recieve 2 sequels on the Satellaview, and a full-on cartridge release in 1999. All versions start off easy, but become Nintendo Hard the further you go into them.

A translation patch exists for the cartridge release, released in November 2017.

In 2020, it was discovered that a second installment in the series known as Sutte Hakkun GB was developed for the Game Boy but never released. This version would have been significantly scaled down, lacking many of the gameplay elements of its console counterpart and keeping levels confined to a non-scrolling single screen.

Due to the Satellaview's amazing obscurity this side of the Pacific, most Western players only got to know Hakkun when he appeared as a Spirit in Super Smash Bros. Ultimate.

Versions of this game include:

All versions provide examples of: