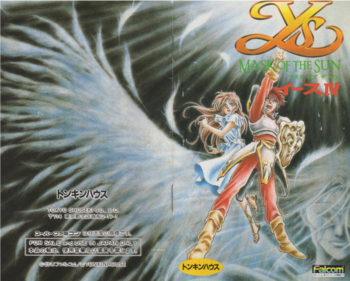 Ys IV: Mask of the Sun is the first of two Ys titles released under the heading "Ys IV", the other being Ys IV: The Dawn of Ys. Instead of series developer Falcom creating this game, they licensed it out to Tonkin House, who also published it, and released it exclusively for the Super Famicom on November 19, 1993. A Video Game Remake headed by Arc System Works and published by Taito for the Sony PlayStation 2 called Ys IV: Mask of the Sun - A New Theory was released on May 26, 2005.

The first Prequel of the series (something future titles would also use as a narrative device), roughly two years after his adventures on the island of Esteria, Adol Christin comes across a bottle containing a letter written in a foreign language. When Adol asks his friend Luta Gemma to translate it, the letter reveals it's an SOS from the region of Celceta on the Eurasia mainland, encouraging Adol to head there to investigate the circumstances behind it.

Returning to the birds-eye-view perspective and "Bump Attack" combat system, Mask of the Sun eschews the change in formula of Ys III: Wanderers of Ys in favor of the familiarity from Ys: Ancient Ys Vanished ~ Omen and Ys II: Ancient Ys Vanished – The Final Chapter. In regards to magic, Adol no longer uses rings or wands, but rather elemental swords to cast different types of offensive spells. This game also marks the debut of "The Romun Empire", a major antagonist who would reappear in the Sequels.

When Falcom released an official Ys timeline, Mask of the Sun was chosen as the canon version of Ys IV instead of The Dawn of Ys, as it stayed closer to the Falcom's vision. Both games would ultimately be Retconned out by Video Game Remake Ys: Memories of Celceta, which integrates elements from both Mask of the Sun and The Dawn of Ys.

This work provides the following examples: