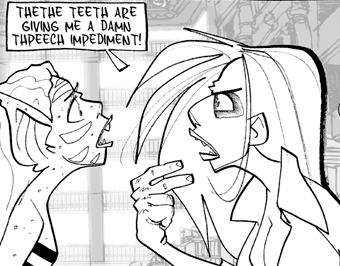 "The teeth, I had to put fangs in. I didn’t want to, but I was told to. I went to an orthodontist, and they put in these fangs, with a bit of plasticine, but I found it very hard to speak, very hard to speak clearly, so I took the bottom ones out after a while. Bad continuity, that."
— Anthony Ainley on

A speech impediment that strikes vampires (and other fanged creatures, as well), where their spoken s's become th's or, more often, sh's.

Here's the technical explanation for why it happens: False teeth tend to cause sibilants (s; soft c, like the first c in "circus"; and sometimes z) to be mispronounced because the prosthetics force a change in the position of the tongue. Interdentals (th) are made by the tongue going against the upper incisors - sibilants are more likely to be mispronounced as interdentals when the incisors are altered or missing, as with fake buck teeth or missing front teethnote hence the stereotypical gap-toothed child's lisp. More common with prosthetic fangs are for the sibilants to become post-alveolar fricatives (sh), caused by the tongue being forced back by the wider and longer canines.

Can be avoided by the actors just redubbing the offending voices over later (without the problematic prosthetics), but episodic tv shows don't always have the time or the budget for that.

The same thing happens to a slightly lesser degree to people who wear upper dentures, and orthodontic retainers. Again, it's the mouthpiece interfering with the position of the tongue.

Other consistent mispronunciations include ventriloquists substituting g or v for b, and f for p — it's nearly impossible to pronounce a b or p sound without noticeable movement of the lips.