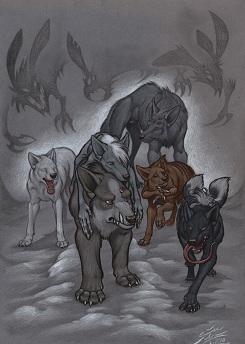 is a webcomic by Finnish artist Papermonkey, uploaded on deviantART.

The story opens with what looks to be a stereotypical plot—the dogs who live out in the world are good, and the hideous mutated hellhounds that live within the crater are evil. The jealous hellhounds envy the beautiful lands of the dogs, and a war breaks out. The righteous dogs triumph over the wicked hellhounds, and seal them away within the crater. However...

The real story begins with a pack of hellhounds, who are gathered by their leader Iacar to be told they're being evicted. Driven from their territory by another pack leader, Pyramos, they are forced to find new territory elsewhere- beyond the craggy borders of the crater. The comic follows the pack as they leave their home behind and venture out into the alien world of the dogs.

Notable for its nicely rendered art, and the artist's attention to anatomy and realistic (barring Rule of Cool) mutations with the hellhounds, along with the incredibly detailed backstory of the world. The first volume of the comic is now in print, unfortunately only in Finnish.