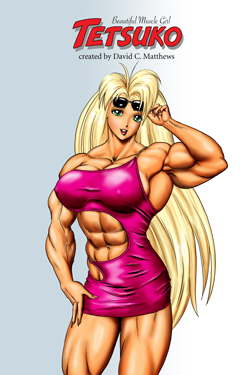 Beautiful Muscle Girl Tetsuko is a Webcomic created, written, and illustrated by David C. Matthews. It is not published on a regular schedule, but “whenever a page is finished” (to quote the creator).

Tetsuko Breckenridge attends college at the University of Florida - Orlando, and works as office clerk/lab assistant/Girl Friday to the brilliant (and beautiful) scientist Dr. Sonya Gannon. One fateful Saturday, a group of thugs working for crime boss Hamilton Slade “visit” the lab where Sonya and Tetsuko are working. Seems that the aged, wheelchair-bound Slade has learned that Sonya is developing a formula that combats aging, rejuvenating the human body. Slade wants the formula; Sonya protests that the formula is years away from completion, and hasn’t even been tested on humans yet. Winston, Slade’s right-hand man, decides that maybe it’s time the formula was tested - on Tetsuko! Sonya is forced at gunpoint to inject her loyal friend and assistant with the potentially deadly chemical, and can only watch in horror as Tetsuko collapses, apparently dead. At a loss as to how to proceed, Winston decides to bring Dr. Gannon to the Big Boss himself, who’ll decide what happens next.

But just after everyone leaves, Tetsuko undergoes an amazing transformation…

NSFW (due to nudity).