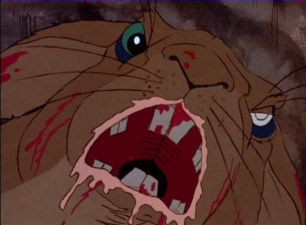 I just wanted a movie about bunnies!
"That's no ordinary rabbit! That's the most foul, cruel and bad-tempered rodent you ever set eyes on! It's got a vicious streak a mile wide, it's a killer! It's got huge sharp... it can leap about... look at the bones!"
— Tim the Enchanter, Monty Python and the Holy Grail on the Killer Rabbit of Caerbannog
Advertisement:

Ah, rabbits. Who could possibly think of a more cute, cuddly, and harmless creature? With their wriggling noses, comically long ears, and fuzzy little tails, they're just so adorable!

Except, of course, when they aren't.

Twisting the easily-recognized and almost universally-beloved form of the rabbit into something terrifying is a common type of subverted cuteness, because we all have the expectation of rabbits as sweet and innocent. Sometimes this is done by making the rabbit carnivorous or otherwise extremely dangerous, but just making it look or act scary is enough to have it fall into this trope. Also, anything that plays the rabbit for horror falls in this trope, which means that stuffed animals and people in costumes all apply.

Of course, in Real Life, rabbits aren't always harmless. As wild animals, they can be pretty vicious when they need to be, particularly around mating season when fighting off rival suitors. Those big goofy teeth aren't just there to look cute and chop vegetables. They can really do some damage.

The Trope Namer is the 1946 Bugs Bunny Merrie Melodies short of the same name, though the short itself doesn't really produce any examples.

See also Grotesque Cute, Killer Rabbit (which, despite its name, covers all cute but deadly animals, not just rabbits), Rascally Rabbit (where the rabbits use their wits, rather than violence, to overcome their enemies), as well as Cats Are Mean and Devious Dolphins (for other instances of normally cute animals getting this treatment). Contrast Righteous Rabbit.

A race of carnivorous rabbits living on the island of Drum.

A race of carnivorous rabbits living on the island of Drum.