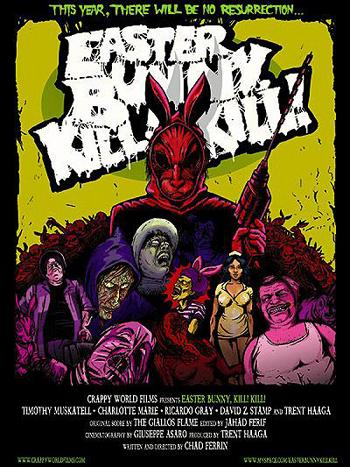 "This year, there will be no resurrection."
Advertisement:

Lowlife thug Remington Rashkor has managed to charm his way into the life of Mindy Peters, a single mother (her husband Donald died years earlier) whose son Nicholas is severely intellectually handicapped. While he loves Mindy, Remington hates Nicholas (feelings which are reciprocated) and abuses him in secret; since she is head over heels for him, Mindy fails to notice anything negative about Remington, who she leaves in charge of Nicholas (who had recently gotten a pet rabbit, which Remington enjoys threatening, from a wandering bum) on Easter, due to being called in to do a double shift at work. No longer needing to behave with Mindy gone, Remington orders Nicholas to his room, and decides to throw an "Easter party" with guests that include drug dealing pedophile Ray Mann, and a pair of prostitutes named Brooke and Candy. As this is going on, disgruntled laborer Jorge (who was doing construction work on the Peters house) decides to break in and rob the place with help from his wife Lupe, and an acquaintance named B.F.

With all these assholes gathering in one place, is it any wonder the attention of an Easter Bunny mask wearing, power tool wielding psycho is drawn? This mysterious killer evidently does not like how Nicholas has been mistreated, does not like it at all, and so they decide to clean house...

A throwback to exploitative cinema (look at that artwork over there on the right) the film was, upon being released a few years after completion, met with surprisingly decent reviews, despite its sleazy nature and obvious low-budget (plastic sheets are everywhere, due to the house it is set in being "under construction").

Remington: "I'm gonna go get some girls for the party."
Ray: "Ladies, huh? Whatever floats your boat..."