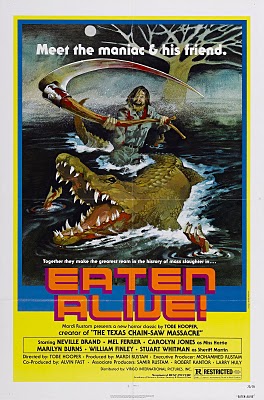 Eaten Alive is a 1976 horror film by Tobe Hooper. It features Robert Englund in his first movie role, as well as Mel Ferrer. The film is also listed under the title Death Trap.

In the Deep South, there's a crazy old war veteran named Judd (Neville Brand), who runs a hotel. He has a pet crocodile named Rocky, which he uses to dispose of people who upset him or his business. And there are plenty of those coming to stay at his place.

In 2000, Tobe Hooper released Crocodile, a Spiritual Successor to this film. Crocodile even references Eaten Alive.