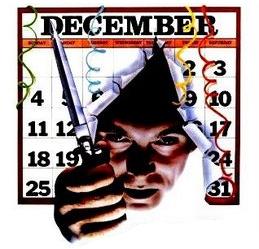 Maybe it is so because the very calendars are against us?
"February 29. Superstition has it that if you are a teenager and have sex on this day, you will be macheted to death by a maniac wearing a makeshift mask made out of a calendar. This superstition is, of course, the basis for the '80s horror movie Leap Year."
— More Information Than You Require
Advertisement:

It goes like this: You're at a nice Easter gathering with your family, when suddenly a deranged killer in a bunny mask starts stalking you. On April Fools Day, that guy you and your friends pulled a rather nasty prank upon is out to get you. On Halloween, the dead rise from their graves and start to terrorize the neighborhood. And on Christmas, The Antichrist decides to be born.

"Oh, for Pete's sake!" you exclaim; "Couldn't these things happen on any other day, like, Tuesday?"

When the horror happens, it tends to happen on holidays and other special days marked on your calendar for various reasons: Lots of people tend to gather around on those days (usually at a remote location), calendar days make nice titles, and nothing quite says Subverted Innocence like (for example) Santa Claus killing people with an axe.

Also, remember, some days are sacred to pagan/occult religions and so "natural" choices for supernatural events. These days may have had Christian and/or commercial holidays added, or they may just be special to the pagans/witches/Satanists/whoever, still not just Tuesday, even if the hero doesn't know this at first. Granted, if you consider all cultures, faiths and customs, every day on the calendar is bound to be a holiday to someone; this trope only applies when that holiday is specifically referenced in the work.

And of course, Lovecraftian unspeakable horrors don't have any use for the human calendar, so they won't bother to do the timezone math to see where to appear. They only care the stars are right on THEIR calendars and none of these calendars have Tuesday!

Popular trope among horror movies (especially in Slasher Movie genre), but not necessarily limited to them.

See also Attack of the Town Festival, Regularly Scheduled Evil, Twisted Christmas, Dangerous 16th Birthday and various holiday episodes. Did I Mention It's Christmas? (or any other holiday) may be in effect for some of these. Contrast But for Me, It Was Tuesday, although the name of that trope might have inspired this one's, as in, the difference between something evil one does every day and the kind reserved for specific days.